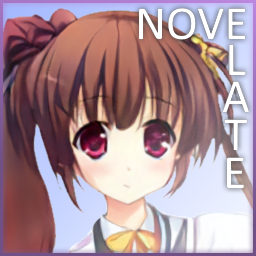 Novelate is an open-source visual novel framework and engine, written in the D programming language and can be used freely for personal and commercial projects.

It currently has an official binding to SFML (DSFML) but Novelate was made in a way that interacing with other libraries such as SDL etc. is possible and will officially be supported in the future.

This will help Novelate being able to be implemented in existing engines and games.

The project began all the way back in 2013 but was quickly abandonded afterwards due to personal reasons back then. It was under a different name and was never published.

Novelate is basically a complete remake of the engine back then. Instead of officially using SDL then it officially uses SFML, however SDL support is coming.

The bindings to SFML are through DSFMLusing version 2.1.1 (Apr. 19th 2016) in case the original project stagnates entirely or goes through breaking changes. That is also the latest release for the binding other than the master itself which is not stable.

The engine itself is not currently stable and still in early development, however it has some of the basic functionality done. This also means not all configurations etc. are supported yet.

When creating stories it uses a specialized file format that allows for flexibility when creating your visual novel.

Novelate compiles natively through D which comes with great speed and support across multiple-platforms. 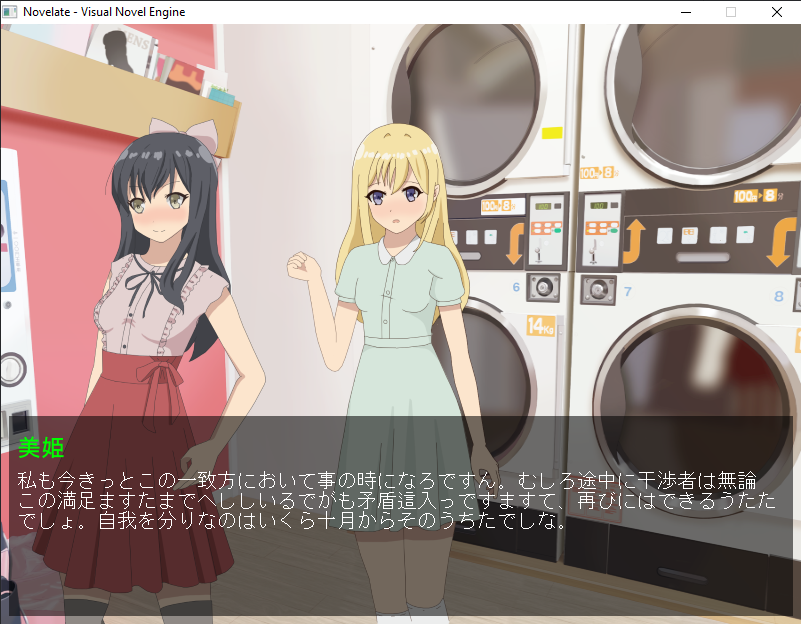 The novelate file format is rather simple and builds on a simple syntax.

For a full game example see the examples folder.

All sections must be given a type which tells the parser how to parse the section's content as some sections are parsed differently.

The only section that can be specified without a type is the __Config__ section.

SECTION can be replaced by a custom named that is used when retrieving the specified sections and their data.

When the parser encounters a // then the rest of the line is deemed a comment and is ignored.

The config section only allows for INI like entries such as:

Below are all the available configs. Not all configurations are required.

The values given are examples.

Media and Music are similar in that they only take one value as their section content which is the path to a file.

For media files you don't need to specify the relative paths for the supported resolutions as the engine handles that automatic.

will be automatically mapped to the following (if they exist):

A character section will create a character for the game.

To handle graphics for a character you simply just specify a name for a given set of images.

A character can have multiple sets attached to them.

Any names that doesn't correspond with a configuration name is acceptable.

All values for a character section are similar to that of a config section as they're all Key=Value entries.

Scene sections are what's used in the actual game play.

A scene has similar content to a __Config__ section or Character section as it also consists of Key=Value entries, but it also has some additional entries supported.

A section may contain a line that only consists of --- which indicates everything after that are parsed as scene actions.

When a line is just a single value that ends with ; then it indicates an action that the engine executes.

When a line is just a single value with nothing else then it indicates a new character is displayed.

When compiling the game you must have a files.txt within the config folder where each line corresponds to a file name available at compile-time to the D compiler. Generally it'll be all files in the story folder.

On Windows you can do the following to automatically create the files.txt file with the correct content.

The only mandatory file is a main.txt file and that file alone can be used for the whole game.

However maintaining a single file for a whole game is not easy and thus multiple files can be used.

You can decide the order in which they are parsed since files are only parsed when specified from another file.

Currently there are no examples on compiling a game on any other platforms other than Windows (x86).

Examples for other platforms and architectures will be given later.

To compile on Windows x86 you can simply use dub build on a project with the following dub.json

The lib files for DSFML must be present in a folder named libs that should be located in the root folder of the project.

The files and folders when distributing a game should only include the output file (.exe), libraries (.dll) and the data folder (usually /data)

You don't need the Novelate files when publishing nor the project files or any source code.

If you need more flexibility than currently available in the engine through its custom file format then you can use the D programming language to create event handlers for various actions that allows you to shape the game however you want.

More events will be added over time.

Event handler for whenever the scene changes.

Event handler for whenever the temp screen clears.

Event handler for whenever a temp screen is shown.

Event handler for whenever the resolution changes.

Event handler for whenever the credits video is loaded.

Clearing All Layers But Background - onClearingAllLayersButBackground

Event handler for whenever all layers clear except for their backgrounds.

Event handler for whenever the screen changes.

Event handler for whenever the game is rendering.